There is a profound and often underestimated source of the phenomenon colloquially known as “douchebaggery”:

People are not very good at realistically estimating fairness, particularly when it comes to our own rights, contributions, claims and interests in general.

This is the sum of your core personal rights, although “rights” might be too formal a word. They’re your essential ownership of your body, property and stuff like this. Most higher animals understand these instinctively – that’s how fundamental they are. In fact, they’re hardwired.

Now, let’s add a second layer to our circle. This represents another type of rights – slightly more derived, less central. This layer might include stuff like “free speech” and “pursuit of happiness”.

In general, the more external a layer is, the less it has to do with the deep lizard brain firmware instinctual “rights”, and the more it is concerned with freedoms and free exercise of abilities rather than absence of harm. This will become important in a second.

Since we now understand what adding layers of rights means, and because I am having a hard time thinking of examples for ten different layers, we can add a few at a time. 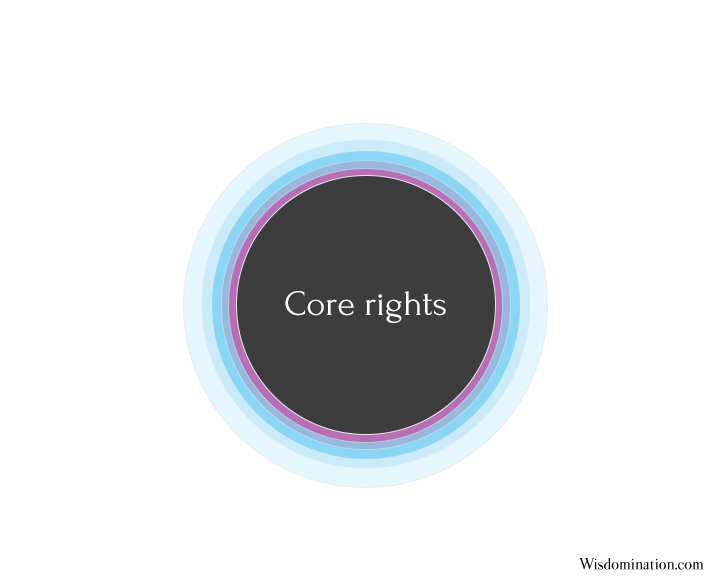 This yields a fairly complete picture. We now have a fancy little almost-finished Onion of Rights™. The fun part is that there is a final layer, which we can call the “Golden rule ring“, the “Do unto others perimeter“, the “Don’t be a dick circumference” (guess what typo I almost made!), or the “Live and let live” horizon. That’s the extent to which, you’re not hurting anybody, and nobody has any business interfering with you. You probably know roughly where it is. Fancy moral theories aside, this stuff is hardwired into our brains. Seven year olds understand it.

The mutual respect for this boundary is the basis of civilisation. For most people, the act of violating another person’s sovereignty (abstract “personal space”) is as unpleasant as having their own violated. And by and large, people try not to. Not on purpose. Turns out that’s an important distinction, and we’ll get to that in a little while.

Ideally, we want a correct estimate, a match, like this:

However, this rarely happens. The enlightened and fair are few. Instead, there are a few basic types of miscalibration. There’s obviously the bully: 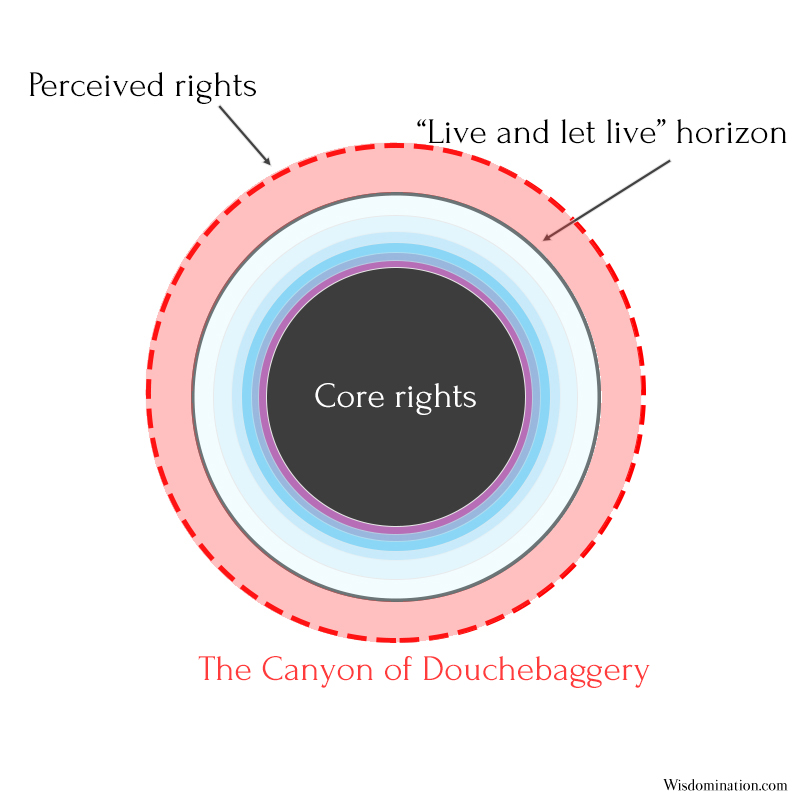 And the complementary pushover/low-self esteem: 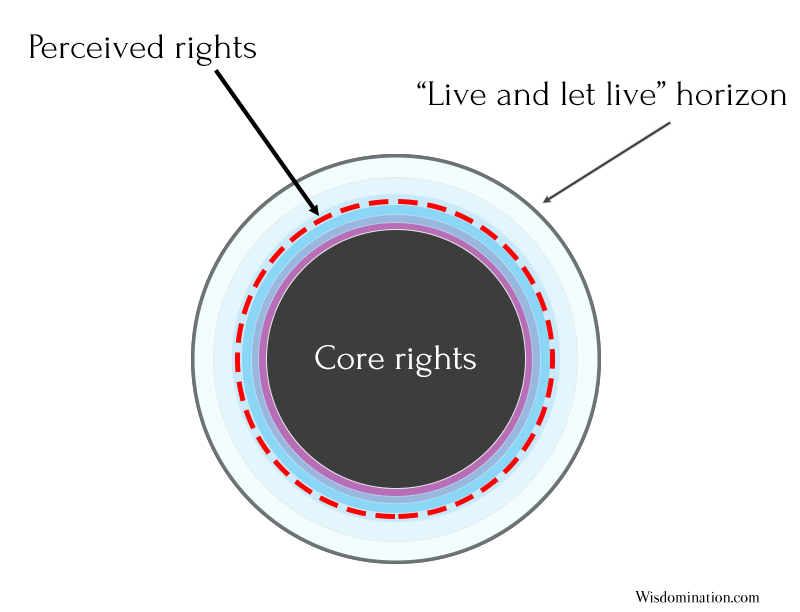 Then there are bullies who believe they are pushovers, and overcompensate by being absolutely horrible to everyone.

If most people were fairly accurate in their appraisals and there were just a few outliers in either direction, the inflated and the deflated people (the psychological sadists and masochists, in short) would arrange themselves into neat little sub-structures that would leave everybody satisfied with their lot and there would be no society-wide problem (though there’d still be private psychological ones). But that’s not the case. Actually, almost everybody is off to a degree that’s significant enough to add up to serious trouble in aggregate. The central tragedy of human community is that almost all people are a little unreasonable.

Statistically, this is everybody.

Which explains a lot. When we live in society, what happens is that our unrealistic senses of space and rights overlap:

As a result, even where the arrangement is mostly fair, everybody still feels vaguely cheated and slighted:

The nastiness in civilised society is not the fault of a few giant douchebags living in hollowed-out volcanoes, but of good or at least normal people being kind of dicks and feeling justified about it.

This is a historically novel situation, and an improvement on the past. Throughout human history, and even today in some countries, there was always a Hobbesian wilful sovereign alpha douchebag (HO.W.S.A.D.), keeping everybody else’s douchy inclinations (douchinclinations) in check by being the biggest dick around.

When that lid pops off, the pent up small-time douchiness of everybody else spills out, which is why post-totalitarian countries typically see a worsening of day-to-day human decency.

Political emancipation is, unequivocally a move in the right direction, but it creates a new set of challenges. It’s a situation that doctors might describe as “Cured patient of a serious disease, weak opportunistic infection took its place, but prognosis hopeful”.

We’ve dealt with the big top-down assholery of the Stalins and Maos of the world to an unprecedented degree. That’s a Good Thing. The next task for humanity is to take care of the garden-variety asshole in each and every one of us on a day to day basis. Especially with respect to ourselves. We do that, first and foremost, by paying attention to what is actually fair and what is a self-serving bias, and then acting on the knowledge.

When it comes to estimating our own rights and merit, we’re all a little unreasonable. There’s an unspoken principle in bankruptcy law that a properly judged case has both creditor and debtor feeling slighted, precisely because their ideas of fairness do not overlap, while their perceived “fair demands” do.

Does this mean that civilised society is doomed to perpetual butthurt and offensive pressures that feel like defence to the perpetrators? I hope not. Perhaps we can consciously decide to be fairer and more reasonable in our dealings with each other, and to cultivate a bias against excessively entitled and unreasonable behavior – in ourselves and others alike. And not only decide, but work on it in a consistent, conscious and disciplined manner.