There are certain topics on which, agreement among reasonably intelligent humans is nearly universal. Taxes come to mind. Apparent disagreements tend to be the result of simple inconsistency and double standards – for instance, the universal opinion on taxes is that they are something that should mainly be happening to other people.

An equally straightforward subject is malware. Indeed, there are few subjects on which, agreement is this unanimous. I can think of “Sex is awesome” and “Kim Jong Un isn’t” as the only more obvious examples.

I am talking, naturally, about all the annoying auto-updaters, control centres, display utilities and diagnostic tools that came with your computer, useless media suites piggybacking on printer drivers (I’m looking at you, Hewlett-Packard), browser toolbars, things that change your default search engine, add applications to the startup list, widespread codecs that install useless media players (DivX, FU) and all similar crimes against basic tech etiquette.

The zoologist in me proposes to break down crapware into two subclasses:

I am addressing this, because unlike hardcore malware, which is unpoliceable, because it is made by diffuse and virtually untraceable hacker groups and intelligence agencies, and already illegal, crapware is typically an explicitly branded product of concrete legal entities. Therefore, rules on crapware can be expected to be enforceable.

One can expect shenanigans when downloading codec packs and torrent clients from sites that also sell almost-chlamydia-free Russian brides. When you touch a wild racoon, you expect to be bitten. But having to deal with that kind of crap from the hands of  relatively respectable software houses is different. It’s like being bitten by your family dog.

I can see their thinking. It seems like a good idea for marketing departments, because they view their bit of stealth advertising and brand exposure in isolation. They don’t take into account that everybody else is doing it, too – it is a textbook tragedy of the commons situation. One tiny application that does nothing except flash (pun intended, ADobe) the company logo five times a day won’t hurt anything. But it’s never just one application. There are many. The cumulative effect of their presence is a conversion of your $2000 twelve-core powerhouse of the kind that until very recently was only to be found on the Starship Enterprise into the equivalent of an abacus operated by a particularly slow and possibly masturbating chimp. This is a classical example of a death-by-a-thousand-cuts, where no single party is appreciably guilty and responsibility is spread out so thin, you can’t really come about to anybody’s office and manually explain to them the error of their ways. Having said that, some offenders are more serious than others. They shall be named and shamed.

Case in point: Java, and its inexplicably stupid inclusion of Ask! toolbar. 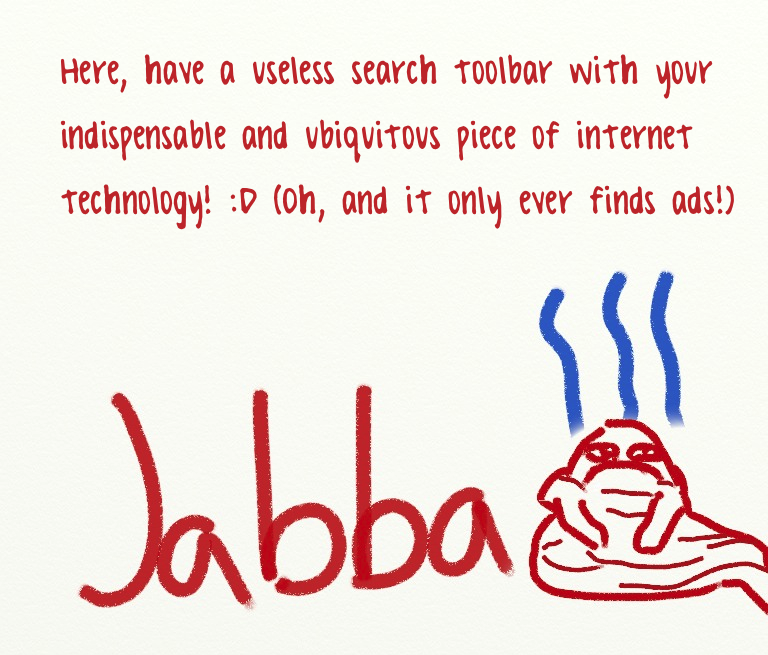 Then there is the superstar update troll, Adobe. All of its popular products have the signature habit of updating thrice a week without any observable change to the software in the last five years.

Apple is a champion of user friendliness, except for what it does with Quicktime, a video format so widespread in digital cameras practically everybody occasionally needs to use it.  Apple uses that need as a trojan horse to also install an army of iTunes, Safaris, Bonjours (more like Maljour), and other crap that’s completely useless on a PC.  I’m not macbashing – in fact, I’m typing this on a Mac. But much like a shark, Mac software is only awesome and indeed viable in its native habitat. On a PC, it serves no function other than discouraging PC people from ever wanting to own a Mac.

Much like a bad sausage, unwanted software carries a different set of risks and problems in the immediate present, and in the longer run. Rather than digestive trouble, however, crapware’s consequences both boil down to the most precious resource of all. Time.

The immediate problem is the hogging of system resources. In the long run, the cumulative effects of crapware induce computational senility and lead to one of two possible climax scenarios depending on the ratio of money and time a particular person has:

1) The computer has to be replaced years before becoming really technologically obsolete.

2) The user has to set aside a day of data migration, formatting and reinstalling to return the computer to a vaguely useable state.

In practice, crapware is forcing us all to periodically either waste a lot of time, or a lot of money. Tell me if that doesn’t constitute real harm.

Where am I going with all this? I have a proposal, and though I am a model lean government type, one reading of Bastiat away from wearing a white wig, I hope we can eventually enshrine it in law. There’s legislation for far stupider things.

During installation of anything, all optional features and extras should be unchecked by default.

Make the extra stuff opt-in, rather than opt-out. That’s it. It’s just good sense. But there is no way to enforce this particular instance of good sense without a law to the effect, which is why I am putting the idea forward here and now.

This begs a solid definition of core functionality that takes care of the inevitable temptation to label unrelated bits of software as “vital”, and force them onto the user anyway, but that’s a technicality for the lawyers. The spirit of my proposal is simple enough.

This is a good place to preemptively deal with a predictable question:

Q: “Dude, can’t you just uninstall that shit, and pay attention during installations?”

A: I can, but that’s not the point – the point is, we shouldn’t have to, in the same way the default option during a routine checkup at your GP shouldn’t be donating both kidneys.

There are also cases when even the opt-out option is missing altogether. Computers now tend to come preloaded with various utilities the manufacturer of what feels like every single component in them felt were indispensable.

I beg to differ greatly on that topic. In fact, I am yet to derive any utility from any of those…well, utilities. Nice misnomer, indeed.

I am, for instance, living with a giant display control utility, courtesy of nVidia, which does nothing above the capabilities of Windows display settings, except for providing a shortcut to drivers and an easier way to manage eight displays, which is the very definition of fringe functionality and no justification for a 200mb traylurking failwhale. Another resident of my tray is Alienware’s awesome suite of control centres and diagnostic tools that do little besides diagnosing the occasional crash they have caused, and letting me change the color of the LED lightning  in the box (I’ll admit that one is good).

(Observant readers might have noticed I’m talking about Alienware while simultaneously having said I am writing this on a Mac. To reconcile the apparent contradiction, I own multiple computers. They all do it.)

Therefore, on top of having optional features presented in an opt-in format during installation,  we should also be able to opt out of manufacturer software in advance. Besides the free advertising, the only conceivable use for these things is making basic maintenance easier for the “average user”, which in this case apparently means a drunken baboon who can’t launch MS Word without accidentally formatting his hard drive and emailing his bank details to Uganda.

That means that for most people, the sum total benefit of these utilities is less than zero. So why are they there at all? If you managed to read this far without having your identity and life savings stolen by Elbonians, you’re probably among them. I know I am. Having spent way, way too much time in my ongoing youth with computers, I think I can be trusted with a computer that isn’t hooked into some sort of HAL 9000 business on the other end. I don’t need, nor want online diagnostics, automatically uploaded crash reports, scheduled system checks and live support teams. All that is just an euphemism for data harvesting, anyway. I need them to make the computer and then get out of the friggin’ picture. I want them to assemble the machine in a fancy futuristic factory and run it through quality control to minimise the risk of parts falling off or the machine setting the house on fire, which could happen very easily following my home assembly. I can handle the rest. Seriously.

This may be a revolutionary idea, but all I want from computer makers is for them to make computers.

Most respectable brands already offer extensive customisation options. All I ask is that they become even more respectable and include one more – a “clean slate” variant, give or take an operating system. I would even be willing to pay extra – I understand the company would be relinquishing valuable and reportedly anonymous usage data, as well as the opportunity to show me their logo every time I turn the machine on. I’m cool with that – just give me the option.

The brown medal of shame goes, to the surprise of nobody, to Microsoft, for its habit of automatically updating and rebooting everybody’s computers without any regard to running applications and processes. Brilliant.

I hereby officially declare that Steve Ballmer (who incidentally looks a lot like a ball) can lick my perineum.

Sometimes, one can almost court the possibility the Linux people have a valid point somewhere in there.

To be fair, some pioneers have realised it is a bad long-term strategy to piss off customers, and are leading an effort to keep the douchebaggery to a minimum. Kudos.

Update: following the discussion here and on reddit, I made a short followup. It’s a summary of the best points brought forth, some of them my own.