The best thing you can do for your financial future is to read about and really understand the logic of compound interest. Because this is how not-just-lucky rich/successful people think all the time about everything.

For those completely new to the concept, “compound interest” is the interest you earn on previous interest.

While poor people, including many governments, have a “value is there to be spent” mindset, rich people think of value as something to be invested to get even more value in the future.

If you need further convincing, maybe you’ll take this guy’s word for it: 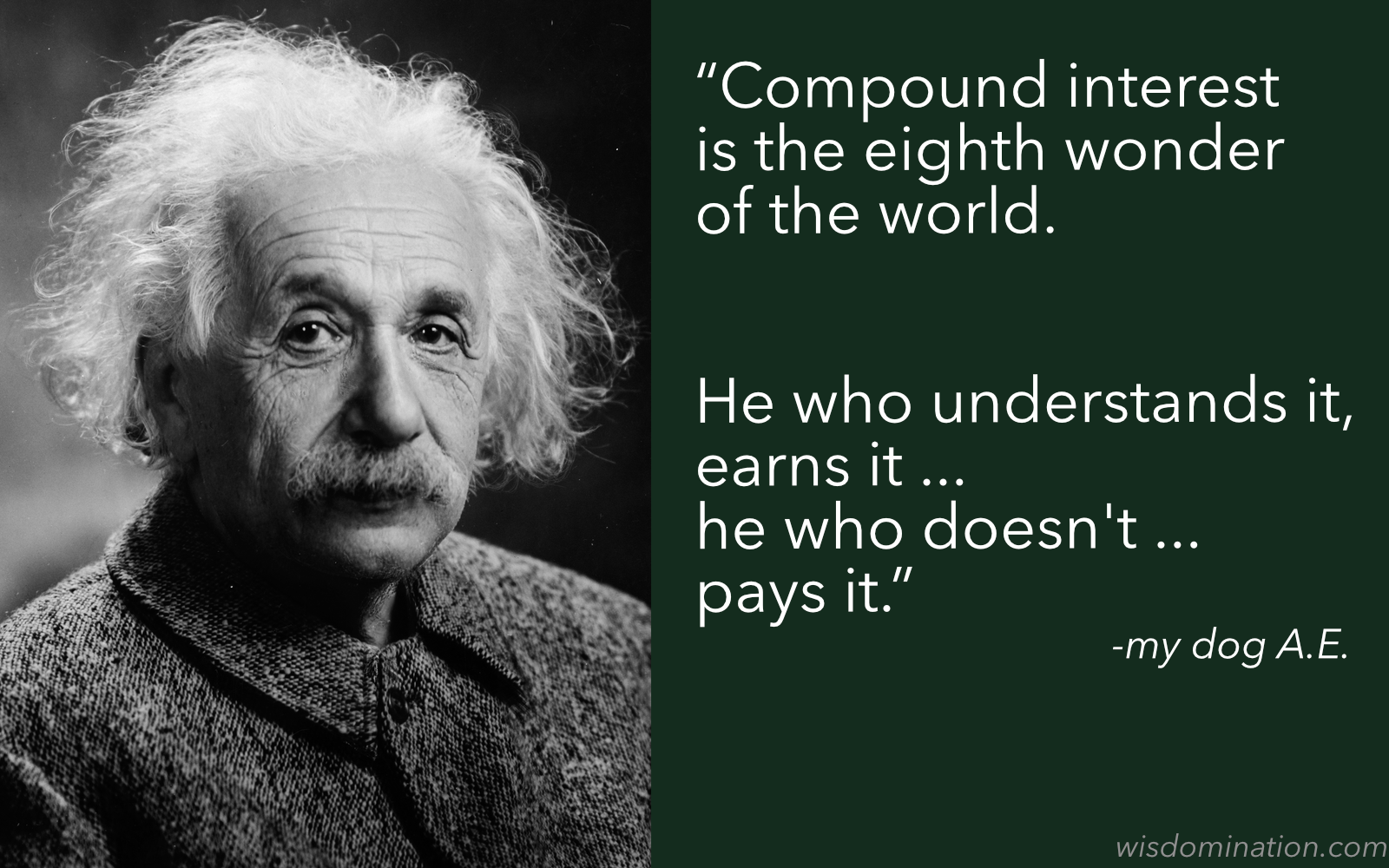 This extends beyond money. Obviously, it applies to the previously covered topic of habit building – the similarity to the dynamics of compound interest is perfect. I’ll probably cover the broader implications in another article. But for now, to stay on the topic:

Start putting away the equivalent of $ 100 per month into a decent investment product (or ideally multiple) for your retirement. (Obviously the figure varies between countries, adjust accordingly to your conditions).

It doesn’t even have to be for retirement, just for later.

Anything you don’t anticipate to need in the next few months should not lay around on an idiotic checking account, slowly succumbing to ZIRP, inflation and confiscatory bank fees. You should put it to work.

Over the 20-40-60 years you have until retirement, the magic of compound interest will make you a rich son or daughter of a bitch. You’ll notice that nothing much seems to happen for a pretty long time and then you’re suddenly on a yacht. That’s how exponential growth works, of course.

That sounds far more lucrative to me than hoping the government decades in the future will deem to even pay out pensions at all.

At this moment, you may ask “Why can’t retirement savings work that way in the state systems and the shady pension funds my crappy bank is offering me?”

Oh they do. It’s just that the returns go to someone else than the savers.

The good news is investing is getting democratised at a tremendous rate. All those shady middlemen are going to be history within a few years, and the democratisation of access to the financial markets (and the returns from them) will change everything (and probably finally win majority support for the notion of “capitalism”, AKA people voluntarily exchanging stuff with each other, by virtue of inclusion).

Whatever your opportunities present and future: Start investing at a consistent rate. Start now. It makes a huge difference to start early, as apparent in the graph.

Especially if you want to have a decent retirement. This is a bit country specific, but state pension systems were designed as pyramid schemes that arithmetically cannot work with a stagnant or shrinking population while maintaining any sort of adequate living standard for retirees.

If you want to have an acceptable retirement, opt-out of government pension schemes.

Seriously. Don’t even plan to collect your state pension because knowing there’s a safety net will make you complacent in planning and investing now.

“But I paid into the system and I’m entitled to…”

Glad you mentioned it.

There are two basic mentalities with regard to welfare systems:

1) “It is stupid to not grab handouts you’re entitled to”. This mindset predominates across Eastern Europe, the Mediterranean, South America and other failed hobbesvilles based on mutual exploitation.

2) “It is shameful to grab handouts you can do without”. You will encounter this in Switzerland, Scandinavia and much of the protestant Anglosphere.

Can you say which set of countries are doing better?

Overall, reducing your dependency on the state is probably a good idea.

In addition, reducing the strain on public finance by opting out of stuff you’re “entitled to” but don’t need is a heroic public service your children and their children will thank you for. Not to mention the inheritance you’re likely to pass on to them.

I will be the first to admit there are psychological difficulties to moving your wealth ahead in time and growing it immeasurably.

People prefer consuming wealth in their relative youth to being rich decrepit geezers, but let’s include the rate of medical progress in our considerations here. If you’re 30 now, by the time you’re 70, that’s likely to be the new 50. And you’ll have half a century or so to reap the continuing returns. Not a bad deal at all.

(Another question is how rates of return and the general logic of financial markets might change if this “work for 30 years, then live off investments for the next 100” model becomes standard, since it presumes a certain rate of economic growth that doesn’t seem that widely achievable right now. However, that’s not a concern that should influence your considerations right here, right now. The logic now is clear. Do it. If and when conditions change, I’ll tell you again how to adjust your strategy).

A fun thought experiment is considering the likely lifespans in the foreseeable future in this connection, because the “100 dollars per months” strategy of compound interest quickly shoots into hundred of millions and billions of dollars at the 100 years + time horizons. It’s what the Rothschilds et co. have been doing over centuries anyway, of course, but a good question is what will happen when this becomes normal for millions or indeed billions of people.

It explains political preference for inflation, of course – that way, politicians get a considerable share of the compound returns on all of the world’s money through a stealth tax.

(FYI, the notion of “stimulus spending” was implanted to get governments to spend other people’s money to the benefit of those of us who actually understand how this stuff works.)

Probably a good thing robots are going to start doing most of the work soon. We’ll need a lot of value produced by not a lot of workers.

You can think of your life as a few decades of hard work to reach take-off speed and then reap the fruits of your share in ongoing economic growth.

If you have any sort of disposable income – at all – investing it for the long run is the best thing you can do. Thank me later (when you’re like 70 and are golfing with the president of the world (me) on your yacht).

100 dollars a month may sound like a lot, but giving up a pair of brand-name jeans or a few overpriced mugs of coffee now to be a rich fucker later is a good deal.

If you don’t have any disposable income, mercilessly examine your spending structure. If you have the money to be on the internet reading this, you can afford to put money aside for the future every month. The more, the better.

Start now. Every extra year of $ 100 per month translates to tens of thousands of dollars per year later on.

See you on your yacht.

Buying me coffee is a great investment, too. It means more great advice for you in the future.