In what must be the world record for the least clickbaity article in the history of mankind, I will show you why dictionaries are wrong about the origin of the word “hedgehog”.

You may think it’s simple and self-evident, “hedge+hog”, and you’d be as wrong as the authors of the Oxford dictionary. That simplistic explanation is a trap. And this is why:

The English word “hedgehog” is too close to the Proto-Indo-European “eghjos” or “heghis”, and Slavic words like the almost identically pronounced “ježek”, to be mere chance. You can appreciate the similarity while listening to the words here.

Beyond the Czech “ježek”, there is the Slovak “ježko”, Lithuanian “ežys”, Serbian “jež”, and similar equivalents in many languages. Russian “ež” looks like a result of permanent inebriation leading to the dropping of syllables. Even there, the core sound is again shared with hEDGehog.

With no hedges or hogs anywhere in sight, the Proto-Indo-European root is probably associated with the concept of standing upright and bristling. This is detectable to this day in Slavic languages, where the hedgehog is self-evidently, or rather self-audibly, literally a “bristler”.

Now imagine the odds of English independently inventing an identical-sounding word with the same meaning, after centuries of using a different one.

The odds are about halfway between “zero” and “when hell calls a skiing holiday”.

To verify the hypothesis that “hedge+hog” is a later false etymology slapped onto an older word that sounded vaguely like that, I was naturally inclined to trace the hedgehog’s journey back through Middle English, Old English and Anglo Saxon to some ancient Proto-Germanic root, barely attested on some bronze pot pulled out of a Hercynian bog.

But when we try to do that, the plot thickens, because the precursors of modern English didn’t call hedgehogs anything of the sort – their word was the typically Germanic “igl” (and variants), which parted ways with the Balto-Slavic branch thousands of years ago. Only later in Old Middle English, around the 15th century, does a clear precursor appear as “heyghoge”. This is discontinuous with previous use, and too close to the Slavic and Proto-Indo-European to be accidental.

It’s also longer and more complicated than the previously used word. Languages ordinarily move in the opposite direction.

So we’re looking at a situation where, according to the implicit mainstream hypothesis, after millenia of divergent evolution, English suddenly independently invented a word that happens to sound almost exactly like the Slavic words for the same animal, as well as the shared Proto-Indo-European root to boot. If you’re not buying that, neither am I. The odds of that are insane.

There are two alternate hypotheses that come to mind, both much more likely:

Either there was an unattested synonym in use the whole time that, for whatever reason, prevailed over its sibling in the late Middle Ages, or English got cross-pollinated by a Slavic word. Like this: 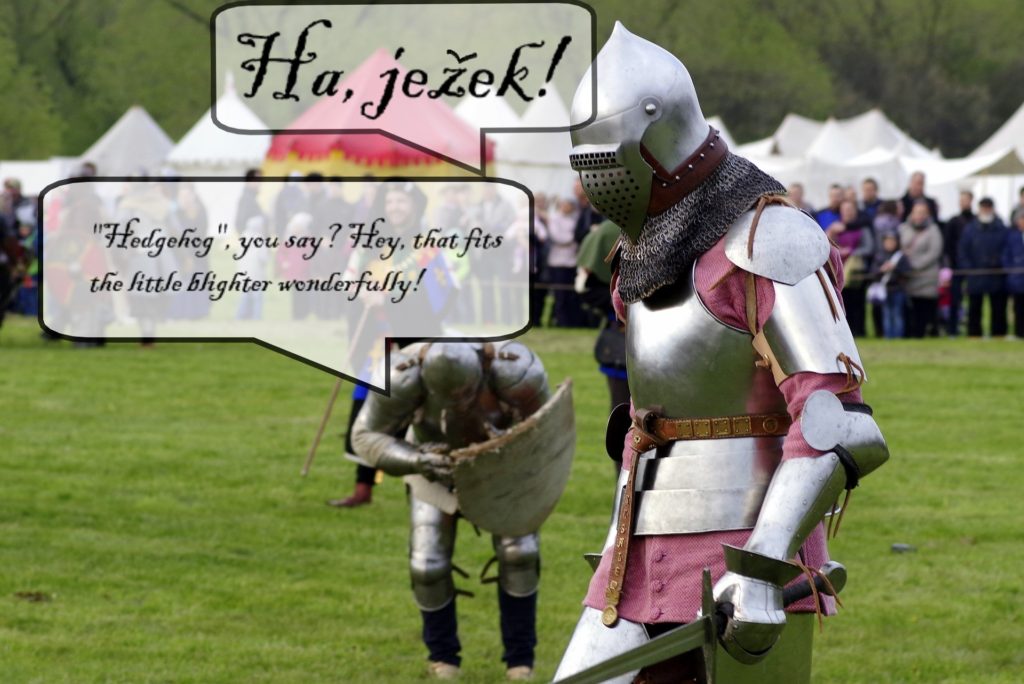 Historians may suggest what contact between Slavic and English people could have facilitated a lexical exchange around that time (Hussite use of anti-cavalry caltrops that would have been called “ježek”?), but it didn’t have to be anything huge and historic – it could have been literally one Englishman hearing “hedge hog” when a Slav said “ježek” and starting to use the word as a joke, similar to how you could start calling your car a “firewagon” or a house a “brickbox” today.

I am reasonably sure that hedgehogs only wandered into association with hedges and hogs later, as a sort of pseudo-etymology. Consider the recently named, but ancient phenomenon known as the “eggcorn”. It occurs when a speaker reverse-engineers a spelling and etymology for a word or phrase they heard that flew over their head, and they deconstruct it into something that sounds vaguely similar and makes sense to them.

It is the exact mechanism that makes IQ 67 Americans call Alzheimer’s disease “old timers’s disease”, preface a claim with “for all intensive purposes”, and misspell “acorn” as “egg corn” – the name of the phenomenon itself being an example of it.

“Penthouses” used to be called “pentices”, as in “appendices”.

Hypothetical novel examples might include “rock it” for “rocket”, “pee-ness” for penis, or “sky folding” for “scaffolding”.

An eggcorn is a false etymology based on a conceptual closeness of sounds the word can be deconstructed into to its meaning.

Stop giving me cute nicknames, I’m fierce and fearsome and also in this case apparently albinistic.

I am willing to give the English the benefit of the doubt – it is possible that “hedge hog” was intentional wordplay, rather than a genuine mishearing-based eggcorn. Nonetheless, the core idea – that the word “hedgehog” originally has nothing to do with hedges or hogs, but is a later interpretation of a similar sounding Indo-European root word probably related to bristling – stands. “Hedge + hog” is a creative retrospective analysis, not a synthetic origin of the word.

The mainstream hypothesis to date has been an innovation – with a new, longer word replacing a shorter one – but it’s too close to the Slavic words, and the Proto-Indo-European root, to be accidental. It’s more likely that the word jumped from one branch of the Indo-European language tree to the next, and got eggcorned there.

Linguists should pay more attention to the humble hedgehog. Just because he’s small, doesn’t mean he doesn’t have a lot to say.

We should legitimately rewrite dictionaries, because this hypothesis is so much more plausible than the old one. This is a proper new discovery.

Nature has not condescended to bestow too many gifts upon me, but the one she did give me is a linguistic sensitivity bordering on a superpower. Most of the time, this manifests as an intolerable torrent of puns my friends have to endure, decent writing skills and the ability to pick up a basic passive understanding of a newly encountered language within hours. On this authority, this alternate history of the word looks self-evident to me.

The hedgehog should become, by far, the most famous historical eggcorn in the English language.

I wonder what others there are.

Or live in the future and tip Bitcoin: 3CZetQM7k4JNcpWKDGyATBATxStitZBJn1