We now also know that a major and historically underestimated factor are simple carbohydrates from bread, pasta, rice, potatoes etc.

But even that’s not all.

The problem is not that we don’t know what’s seriously unhealthy, it is that some kinda-sorta unhealthy things are often considered healthy.

To be clear, the kinda-unhealthy foods are still fine for a person who runs fifty miles a week. However, for that person, even pizza with Nutella is fine.

Put in enough effort, and you can do almost anything. But if you want a good cost/benefit ratio, then the proper way is knowledge coupled with discipline, not effort.

Great athletes can benefit from better diet. In fact, it is spectacularly difficult to find a great athlete who does not have a great diet. We can argue which way the causation goes, or whether it’s correlation with a common cause (such as superior discipline). Sensible diet plus exercise is better than either on its own. they’re complementary goods. But the point of this article is that you can get good results without counting calories and living at the gym if you avoid a few common pitfalls.

To make matters worse, brown bread is often just white bread with caramel colouring and bird feed sprinkled on the outside, and multi-grain is the same as plain white, but with more (equally bad) types of flour.

Glaring examples are various milkshakes, yoghurt drinks and fermented dairy products with “0%” fat, but 400 calories in simple sugars and only trace amounts of any real nutrients. Which means you’re hungry ten minutes later.

The only real advantage of dairy drinks –  probiotics, IE lactobacilli – is available in pure form in every pharmacy and drug store, without any of the disadvantages. If you care about your gut flora, get those instead.

You really don’t need a gym membership. Sure, it’s extra motivation, and a sensible businessplan if you’re there for reasons other than exercise – like MILF-hunting, waiting for that one hot girl to lower her standards, standing at the bar talking instead of exercising, or oggling shredded dudes and wallowing in their musk.

The ice skater Martina Sablikova has won a wagonload of olympic gold medals and broke multiple records, while training on a bumpy natural pond. Which means that a typical sedentary westerner doesn’t need high-tech torture tools to shed fat and keep in shape, either.

But people who care primarily about looking and feeling good (and preventing disease later in life) can save 50 dollars a month and simply eat smarter and exercise a bit. Or a lot. Go wild. The point is that effective exercise is remarkably simple and cheap, and doesn’t require complicated contraptions or fitness fads. Zumbayoga bikramkickboxes are pointless.

But gyms’ business models are based on fads, selling the promise of a shortcut and replaceability of sweat by brightly colored equipment. Doesn’t work that way.

Let it be known once and for all:

Bottled fitness shakes and smoothies are basically bags of gummy bears or bars of chocolate with added taurine, arginine and lecithin, which are about as useful to a casual athlete as a particle collider is to a dormouse.

One of the saddest sights in dining are defeated-looking people grabbing a small fistful of vegetables, and then pouring a gallon of the worst-possible-transfats sauce and a slice of bread’s worth of croutons (IE particulate toast) on it “to make it more appetising”. Those people would literally be better off eating a hamburger.

Yes, fried müsli with fruits, nuts and chocolate is yummier than plain old raw oatmeal. Which is precisely why the asses of people who eat it are not yummy.

Surprisingly, printing the word “FITNESS!” next to a slim feminine figure on the box does not transmute the contents.

Speaking of the box, it will invariably have a variant of this gem: 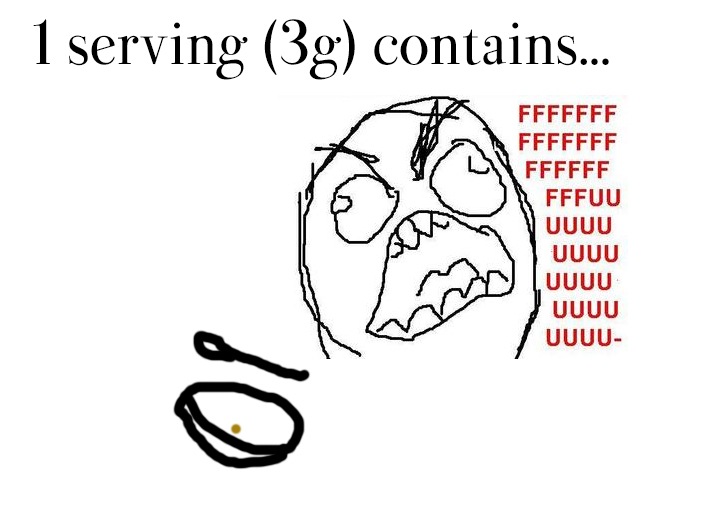 The nutritional info looks fine, until you notice the serving size wouldn’t feed a toddler, while feeding an adult requires eighteen (servings!). Which means a reasonably filling bowl of breakfast cereal adds up to half the recommended daily energy intake for a grown human.
Protein is better breakfast – scrambled eggs with bacon (yes, bacon) are much healthier than “fitness cereals”.
Rice cakes have the sad distinction of being both uniquely unappetising and uniquely unhealthy. It’s mostly air, but the rest is starch. Stratospheric glycemic index.

The numbers mean that a bottle of a “sports drink” negates a kilometer of running, or a half hour on a bike, or a full session of weight training (counting just calories).

“But it has electrolytes!”

Electrolytes are irrelevant for a regular mortal doing a normal workout. Even professional athletes wouldn’t pour this stuff down their throats if it wasn’t in their contracts. Why do you think they pour it on each other’s heads instead?

So what should you drink before, during and after exercise? Water.

Pro tip: make your own ice tea and train yourself to like unsweetened drinks. Seriously, weaning yourself off sodas and sugary drinks alone is the single most important thing to do if you’re even slightly overweight and haven’t done so already.

This tempts a special type of aspiring dieters, who hope losing weight won’t require any substantive change or discomfort on their part, to substitute brown sugar for white in a cosmetic and inconsequential dietary change, thereby obtaining a false sense of “having done something” for themselves. This then enables them to throw their arms up helplessly six months later when nothing has changed, declare themselves exceptions to the laws of thermodynamics, and go back to eating buckets of ice cream in their underwear “because it doesn’t matter anyway”. See also the above section on salad.

I call this “Potemkin dieting”.

It’s completely idiotic to think “brown’s fine” and sweeten the fuck out of eveything. A plague sore in the nose is better than one on the nutsack, but it’s still a plague sore. Sugar’s sugar.

(Sensitive readers will indulge the suggestive imagery – shock therapy is ultimately for the good of the reader, because a permanent change of eating, or any other deeply ingrained habits, requires bigger guns than rational argument and gentle persuasion. Wish it didn’t. World’d be a better place.)

By contrast, carbs are easily metabolised, and their entire calorie content passes straight into the bloodstream. From there – unless immediately used – it deposits on your ass, thighs, hips and belly.

Too much fat in food = greasy poop. Too much sugar in food = ass visible from orbit.

There’s also growing evidence that nutrition has long-term effects on hormonal levels, and even metabolic function – the body gets used to preferentially using the source of energy it gets most often. Lots of fats (and minimal carbs) in diet mean that the body will start burning fat earlier, and in a more beneficial ratio to other types of reserves (importantly, muscle) when you exercise. That’s slanting the field in your favor.

In conclusion: look, we all need to take proper care of ourselves.

Aside from the obvious private benefits, there are society-wide considerations. With the skyrocketing costs of healthcare, the only way to avert fiscal disaster in a few decades is massive preventive care via science-based nutrition and exercise, now.

Plus it gives my readers a competitive and reproductive advantage, which means they will eventually become the dominant demographic and elect me galactic president.

An aside about sides:

In the dark ages (= as recently as a hundred years ago), meat was comparatively rare. Mileage may vary in different parts of the world, but European grandmothers will still tell you that meat was eaten maybe once a week. There wasn’t enough proper human food (IE animal carcasses) to go around – and certainly not for a daily requirement of 4000 calories while quarrying stone, tilling the fields or chopping down trees. To feed everybody, and especially the peasantry after the nobility ate all the good stuff, a lot of cheap extra padding was added to meals.

We call it “side dishes”.

The habits endure, and padding dominates many cuisines. The problem is that the calorie requirements of today’s sedentary lifestyles are half of what our ancestors needed, yet we still eat like medieval lumberjacks. Cue the cellulite pandemic.

Which brings us to the food pyramid:

Full disclosure: the author chewed on banana bread (with crumbs!) while writing this. Throughout the editing process, pizza. With wine.

Time for another marathon.